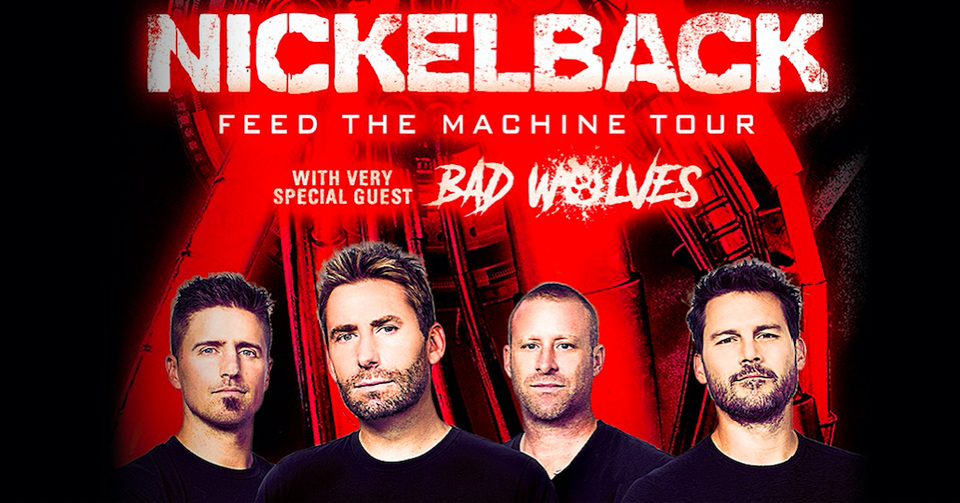 Nickelback has announced their massive Feed The Machine Tour will land in Australia this summer, bringing their biggest production yet for three shows only.

Touring in support of their ARIA #3 album, Feed The Machine (out now through BMG), these will be Nickelback’s first Australian shows since May 2015. The multi-platinum-selling powerhouse will hit the Brisbane Entertainment Centre on February 13, Sydney’s Qudos Bank Arena on February 15 and Melbourne’s Rod Laver Arena on February 16 - with very special guests Bad Wolves.

Nickelback return to Australia with their biggest and loudest production yet, a high octane show of tracks from the band’s enduring nine-album body of work such as all-time classics, ‘How You Remind Me’, ‘Far Away’, ‘Burn it To the Ground’, ‘Gotta Be Somebody’ and more recent hits from their current album, Feed The Machine, such as ‘Song On Fire’ and ‘Must be Nice’.

The international recording superstars have amassed 50-million-plus units sold worldwide, more than 23 chart-topping singles and an online audience exceeding 21 million, with a staggering 1.5 billion YouTube views and 1.4 billion Spotify streams. All the Right Reasons, which sold in excess of 10 million in the US alone, has been recently awarded the RIAA Diamond sales certification, putting them on an elite shortlist of artists to ever accomplish this.

Fan Club members may access tickets and VIP Experiences first during the exclusive pre-sale starting at 1pm this Monday, October 8. Sign up for the Fan Club here.

My Live Nation members can also be among the first to secure tickets and VIP Experiences during the pre-sale commencing at 10am Wednesday, October 10.

Bad Wolves, comprised of five LA music veterans, rose to worldwide acclaim this year with their cover of The Cranberries’ intergenerational hit, ‘Zombie’, hitting #1 on iTunes Overall (USA, Canada, Australia), #1 on iTunes Rock globally, #1 on iTunes Metal globally, as well as taking the gong for the #1 rock song of 2018 on iTunes. The official music video  has accumulated more than 180 million views on Facebook and YouTube combined since its release, in addition to cracking in excess of 55 million Spotify streams. The track has been certified platinum in the US and Canada, as well as gold in Australia and Sweden. In May, Bad Wolves released their debut album, Disobey, which debuted at #9 on the ARIA Charts. In June 2019, Bad Wolves donated $250,000 to Dolores O’ Riordan’s children. The band will also be playing their latest single, “Hear Me Now” featuring DIAMANTE, which has been storming the U.S. rock charts, currently at the #5 position.