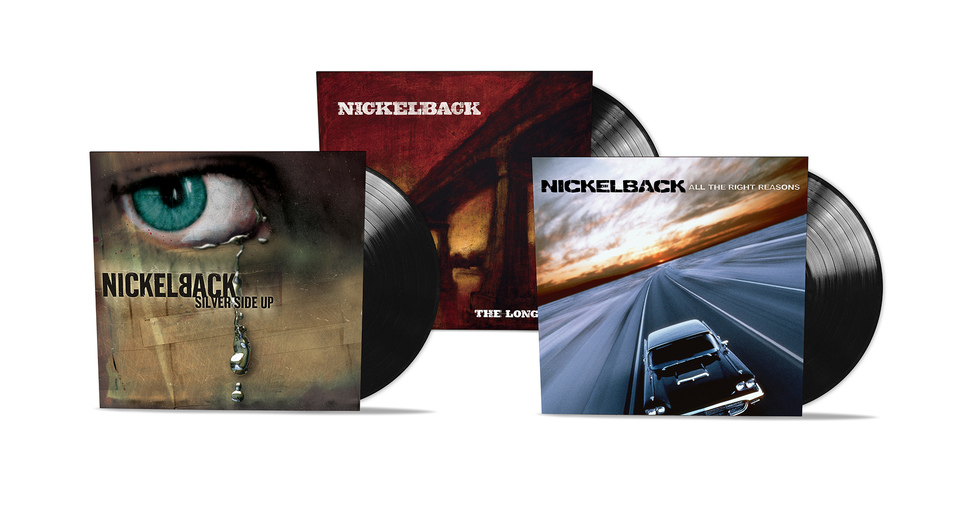 Nickelback will reissue three of its most popular albums on vinyl this summer as the group hits the road to support its latest studio release, Feed The Machine. Pre-order HERE!
The band’s extensive 45-city headlining tour of North America will begin on June 23, and includes special guests Daughtry and Shaman’s Harvest for most of the shows. Fans in Western Canada will see special guests Cheap Trick and Shaman’s Harvest. Tickets are available via Live Nation.

“As a vinyl collector myself, I am elated that Rhino will be releasing three of our albums on vinyl this July,” notes guitarist Ryan Peake. “Each of these albums were pivotal for us in so many different ways and to be able to share them in this format, with our supporters, is humbling.”

These three records are at the core of Nickelback’s massive commercial success during the 2000s and represent combined U.S. sales of more than 19 million albums.

The vinyl reissues begin with Silver Side Up. Originally released in 2001, this would become the group’s breakthrough album, reaching #2 on the Billboard albums chart. It was certified 6x platinum in the U.S. by the RIAA and spawned the singles: “Too Bad” and “Never Again.” It also featured the #1 smash “How You Remind Me,” which topped the charts in several countries and was nominated for a Grammy for Record of the Year.

The band returned in 2003 with its fourth studio album, The Long Road. After debuting at #6 on the album charts, it was certified triple platinum and later nominated for a Grammy for Best Rock Album. Among the standout tracks are hits like “Someday,” “Figured You Out” and “Because Of You.”

Nickelback’s fifth studio album, All The Right Reasons, debuted at #1 on the albums chart in 2005 and currently ranks as the best-selling album of the band’s ongoing career. Since its release, the record has sold more than 18 million copies worldwide and was recently certified diamond by the RIAA.

The album’s phenomenal success can be attributed in large part to the number of singles it generated. Over a two-year period, seven of the album’s 11 songs were released as singles. Three of the biggest tracks were “Photograph,” “Far Away” and “Rockstar,” which all reached #1 on the Adult Top 40. Other highlights include: “Animals,” “Savin’ Me” and “Side Of A Bullet.”